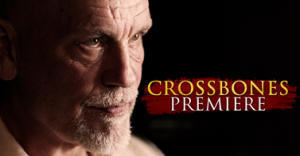 Wait, that should read New Pirate On Television. I mean, I don’t want to promote pirating television…I think.

It’s hard when a word can serve as a noun or a verb.

Well, that was fun! Watched episode one, was surprised (sorta) to find I was siding with Blackbeard totally. I thought, from the sneak videos, that I would be divided between the fine doctor/spy/assassin and the pirate/politician/philosopher. But nope. Totally rooting for the pirates.

Malkovich is divine, as always. Shows us a pirate determined to stand up for the freedom to do whatever the hell he wants. (Is this historically accurate?) (Do I care?) I especially like his speech about whether he is an Englishman or not. (Pretty clear he came down on the side of the ‘not.’)

This echoes what I write in my Forever A Pirate series so clearly. I ADORE that. (Why aren’t they making a series out of my series?)

The doctor, Blackbeard’s antagonist. What happened to ‘first, do no harm?’ I mean, wow. And with no show of a conflict of conscious, he starts right off by killing the inventor of the miraculous device. (This is a historical fact. There was a huge reward to the inventor who could solve the issue of a ship’s navigation. Not that he was captured by pirates and murdered, but that the reward was offered. And won.)

And the governor of Port Royal? Wow, color me totally disgusted. Seems like someone is pissed that he got fooled into thinking he’d killed Blackbeard. Taking it personal, honey? (Was that Timothy Dalton?) And what’s with the hair? Looked like a muppet. Dude, it’s called a comb.

What’s my opinion of the debut? Lots of fun! And I hope they make that pirate town, built on an old
airbase in Puerto Rico, a tourist destination. I’d go! (I think I read that somewhere…)