The invasion is on! The Chameleon Goggles has hit cyberspace today… 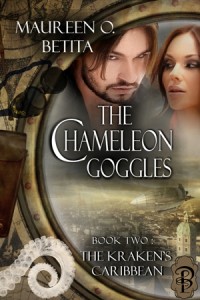 I have a nice juicy excerpt here…

Mick held back as Keitran bent his head over the cold-hearted stranger, although he wanted to haul out his knife and slice into her bitter face. He’d have made her talk, and although she might not have been much use afterward, he’d have felt better. Tink understood, but Janey and Emily had glanced away.

“Emily?” Janey’s cried out and Mick glanced at his sister-in-law. She’d gone deadly pale and stared oddly at Keitran as he fed. The vampire lifted his head from his prey and gazed at Emily, who sank to the cabin floor.

What the hell?  The air in the cabin suddenly felt charged with anticipation. Emily gasped, grasping at her neck.

“Mick! Stop him!” Janey called out.

Mick snarled, attention returned to the vampire. This bitch knew where they’d taken Jezzie; he needed that information at any cost. Davis flew past him to throw himself atop Emily and with a thud he sprawled atop the woman. Whatever connected Keitran and Emily broke.

Keitran blinked, encompassing black emptied from his eye sockets, and he pulled away from the nvader,
stroking her hair. She moaned and fell against his chest. The vampire held her close then settled her into a chair. “Rest.”

Mick glared at the intruder. He’d have snapped her neck if they didn’t need the information she held.

Keitran strode to where Davis and Emily lay, but Mick grabbed him. “No, ask her!”

“I will. She is under my control, Captain March. But I did not intend to attract Mrs. Silvestri. I want to evaluate her response.” Keitran pushed past him to the couple on the floor.

Janey’s voice held accusation. “You would throw Emily away?”

“I would throw all of you away for Jezzie.” Damn, Mick needed someone on his side with this. “Don’t you understand?”

Tink, of all people, backed him up. “This isn’t about Jezebel. It’s about our world. If they keep her, if they force her back to their use, we will be invaded. Novan is always hungry. It’s a world totally based on capitalistic greed. She helps Mama Lu block their portal. We need her back.

Emily groaned. “Get the fuck off me, Davis!”

“What the hell is a Novan?” Keitran reached to assist Emily to stand, but she flinched away from him. “What the hell did you do to me?”

Mick shoved the vampire aside and hefted her to her feet. He examined her face a moment, noted her dilated eyes and clammy skin. When had she been vampire touched? “Out, you need to get out. You’re too close to Keitran and won’t be any good to us. Janey! Take her out on deck!”

“Fuck off, Mick! I am not close to Keitran!” Emily pulled away from him with a glare.

“You are. I didn’t realize it, but I blind blasted you and forged a link between us. I won’t turn you, Mrs.
Silvestri, but Mick may be right. My nature guides me to gentle possible prey.” Keitran spread his arms slightly and bowed to her.

“Gentle? Oh, lull me into a false sense of security. Trust me, I did not feel secure!”

“Not a problem.” Emily sat down at the table. Davis fetched her a fresh tankard of rum. “Thank you. And I’m sorry I snapped at you.”

Davis simply nodded, glancing at Keitran. The vampire had positioned himself behind Nandinia and set his hands on her shoulders again. “We can discuss the bond between us later, Mrs. Silvestri. Right now, let us settle this business.” He stroked Nandinia’s hair. “Tell them about Jezebel, or Jasmina as you know her. Where is she?”

Decadent Publishing and others!