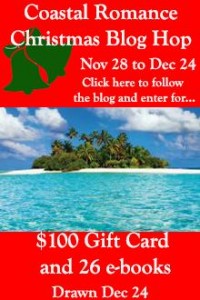 I love living on the Monterey Bay. I’ve always had a deep connection to the Pacific Ocean and taken great inspiration from it. From my early days on one side of the bay, to my later days, on the other.

It started with the fog. And the otters, the cypress trees across from where I lived… Jacque Cousteau specials…so many things! There is something very life affirming about the ocean. About water in general. And although I don’t know how to sail, I do enjoy the opportunities I have to go sailing.

A few weeks ago, the Lady Washington visited Moss Landing, at the apex of the bay. And my husband and I booked ourselves on a two hour excursion tour. Beautiful day, sunny, a fair wind and a sweet bit of swell. I. Was. In. Heaven. 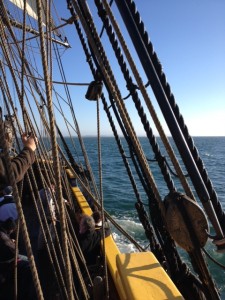 Alas, it was too short, but such a delight. For those who aren’t aware, the Lady Washington is the tall ship which appeared as the Intrepid on The Pirates of the Caribbean; Curse of the Black Pearl. She was blown up and sank – oh – midway through the movie. Ah, the magic of Hollywood, she still sails!

And pirates? Well, they are my favorite thing to write about. From my first published series, The Kraken’s Caribbean to the present series, A Caribbean Spell. I never give up the opportunity to include an ocean, a ship and a bit of pirates in my writing. Or a lot of pirates.

The Kraken’s Caribbean is a trilogy that may well morph into a four volume series, with several shorts along the way. I adore this world. As I write of sailing without being a sailor, I also write of historical eras and places without being historically accurate. But I have fun! The tagline of this series? Where anything can happen – and usually does. Take care if you enter this world. It will surprise you…a mix of paranormal, some time travel, steampunk… I not only ignore the rules on this one. I trashed them. Oh, and did I mention the romance in the first book is between a fifty-three year old widow and a seventy year old pirate? 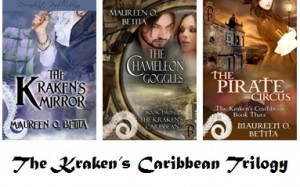 A Caribbean Spell has just started, even though the fourth in that series just came out. But it is all considered a start, because there will be, at least, thirty books in this series. And one couple. (I believe that sexual tension and a rewarding adventure doesn’t end with finding your match. It never stops, if you’re doing it right.) Join the adventure… Pirates! Romance! Adventure! Sexual Witchery! And More!

The newest, Magic’s Hostage, is on sale now! For a limited time, only 99 cents on Amazon!

I was asked to write of the coast, a coast, a body of water, my books…and I believe I have.
Tell me, what your favorite body of water is and why… I’ll pick from the comments someone to receive a stone trivit, with a handsome pirate ship painted upon it. Now, Follow the link to the next blog!

And don’t forget to enter the big rafflecopter contest for the $100 Amazon card and an ebook from all us at Coastal Romance Authors.

And there will be chances to win, again and again…don’t forget to check up the rest of the author’s as they blog, all the way up to Christmas!