Home Uncategorized Where I Am/Where I’m Not

Where I Am/Where I’m Not

Been a wonderfully productive few weeks. Right now, I’m a few weeks away from my drive to Las Vegas and the Romance Novel Convention. Right down the Central Valley of California and across the desert…in August. Not looking forward to that heat, but it is what it is! I’m going to overnight in Barstow, then slide into Vegas on Wednesday morning.

I’m about ready, though I still need to polish my panel presentation. I’ll be speaking on “What I Learned About Writing From Nearly Dying.” The write up is wonderful and it’s certainly a topic I know well. I take credit for the first three quarters of this, but the last few lines? I don’t know who did them, but thank you! Brilliant, just brilliant…

You can learn a lot from nearly dying, especially about fear and how it can hold you back. Although, once the worst has happened, that’s when second chances appear… and third, or fourth; however many it takes. Let me inspire you with my story of going from Sudden Cardiac Death and ten days in a hospital, to attending my first romance convention a year later, pitching a year later, to an agent a year later and signing my first book that next year.
At eight books now, I’m still writing, still publishing and still believe in facing the fear and laughing in its general direction. It is possible; I’m proof. My story will inspire you to see past the roadblocks and hold onto the fun of writing. You can survive rejection, criticism and not knowing how to do everything perfectly from the very beginning. We all start somewhere, I started at death’s door.

So, that’s the next project, polishing up that panel. Meanwhile, I’ve done the work and the print version of The Pirate Circus, book three of The Kraken’s Caribbean, is available at Amazon. And…at the same time, the print version of Red Sean’s Revenge, book two of A Caribbean Spell Series! Plus, been fiddling with a million things to finish up so I have some neat stuff to hand out at the convention. 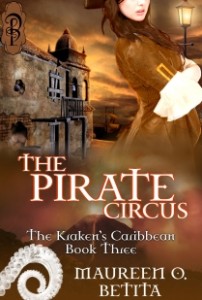 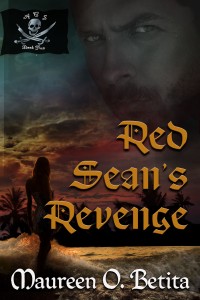 But! What am I not doing?

I’m not recovering from the RWA National in Atlanta. I didn’t do much on the convention circuit this year. I hear the convention was wonderful and three cheers for my dear friend, Terri Osburn, who is conquering the world with her contemporary book, Meant to Be. If you need a good beach read, this is the book for you. Sweet, charming and wonderfully fun!

And congratulations to Eloisa James who finally broke from being nominated for a RITA Award to winning one! And what did she win with? A pirate novella! In fact, I remember speaking to her about pirate stories at Moonlight & Magnolias a few years ago… Wonder if I inspired her…? Seduced by A Pirate…RITA Winner!

So, stay tuned, I’ll be blogging about the prep for the Romance Novel Convention, my panels, and where I’ll be in the next few months… Hint? A vacation…Hot Mojave Knight…Convolution…PhilCon…
Now, I’ve made myself tired!