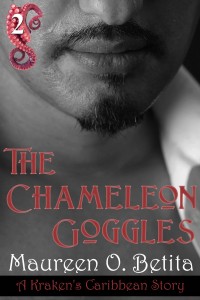 The Chameleon Goggles – Book Two of the Kraken’s Caribbean Series

Nothing is ever dull in the Kraken’s Caribbean, at least not for very long. Emily is settling into life with her new husband in this strange new world when things heat up again! A zeppelin sighting opens the door into another realm and unlocks the gate to Captain Jezebel’s past, barricaded for decades.

The denizens of Tortuga must band together to save their world from an invasion that threatens to destroy everything they hold dear and when Jezebel disappears, Emily and the motley crew of the Cursed Quill risk everything to travel to a world where greed is king and lives chattel for the Directors and their pet scientists.

Jezebel is thrust back into the horror of her childhood, and the carefully constructed walls protecting her mind crumble. Her life in the Caribbean, her relationship with Mick…her very sanity, hang in the balance. Novan has come for their lost daughter and all her stolen inventions. What can a 17th century pirate ship do against a military airship? Even with the great Albino Kraken at their side?

In the end, he and Jez always came back together. They did better together than apart. He loved her. He was pretty sure about that.

But she kept more secrets than any boatload of pirates he’d ever sailed with. She guarded the fortress inside her with a fierceness that held him at a distance. He’d never been able to break through. And she wouldn’t talk about where she’d come from.

Emily Pawes would chatter about her world, laugh about the things she missed and the things she didn’t. She’d described some Italian concoction with such detail, he wouldn’t be surprised if one of the crew set up shop in Tortuga and gave a shot at fashioning it. Pissa. He didn’t think the name sounded terribly appetizing, but her description left him without a doubt. It must taste good.

Tink alluded to her world, spoke of shadows and golden opportunities for a talented thief, not to mention all the successful tricks she’d pulled, and Janey chattered about odd details, not all gloriously.

Never a word from Jezebel about her world. What she longed for or had gladly left behind.

She constantly kept him wondering and on his toes. There she stood, a sight to stir a man’s soul, steering the ship around the spit of land where they lingered, waiting for the French merchant to come by. The wind stirred her hair, lifting an odd bit of loose curl from where she’d tucked it behind her ear after it escaped from the braid.

A surge of pure lust hit him. Not an unusual event when gazing at her. Her eyes met his and she called out to Tink, “Take the wheel. I’ll be in my cabin. We probably have an hour before the attack.”

He ignored Tink’s crude laughter as he followed Jezzie, his captain, his woman, his enigma to her quarters.
—–

http://thepenmuse.net/
This book had a very unique sensibility, and an unusual plot. If you liked Pirates of the Caribbean and you like Steampunk, you’ll enjoy this book.

http://www.bittenbyparanormalromance.com
“A frolicking good time of pirates battling ships on the seas and in the air. It is also a dark tale of one woman’s battled to overcome her past.” 4 Howls!

“Ms. Betita has given us quite a mixture of genres here. This isn’t just Science Fiction or just pirates, this really is a mixture of those with Steampunk as well as Action and Adventure… I could barely breathe while I was reading this!

Jezebel came to the Kraken’s Caribbean when she was fifteen. Thirty years later, she’s captain of the Cursed Quill, a ship manned by men and women from different times and places. She’s a good pirate, always leaving enough so that the ship’s she raids will keep in business. Doesn’t pay to kill the goose, she figures.

Jezzie has brilliant red hair, she generally keeps in a complicated braid. She is a deadshot and unbeknownst to her crew, a brilliant inventor. It’s thru her innovations that the mechanical toys that wash up in Tortuga work. Her sharp green eyes miss nothing.

Slow to anger and never one to show emotions, she relies on few people. Her first mate, Tink and her longtime love, Mick, know some of her past. But not all. Jezzie doesn’t share. It simply isn’t in her nature!

Mick is a native of the Kraken’s Caribbean. A very clever man, he’s been a captain of his own ship before, but finds serving on the Quill a more rewarding post. For one thing, he doesn’t have to make all the decisions, and for the other…there is Jezebel.

Mick recently discovered he’s actually a Silvestri offshoot, and half-brother to Captain Alan Silvestri. Fine by him, as long as no demands are made.  And he never did like the man he thought was his father.

Mick is dark haired, dark eyed, with a mustache and short beard. He’s forty three years old and can still drink most any man under the table. He thinks he loves Jezebel, but he’s not certain. Love is such a heavy word…