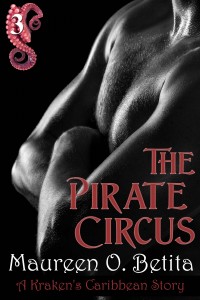 The Pirate Circus – Book Three of the Kraken’s Caribbean Series

Bosun Janey knows who and what she is. A pirate. And a damned good one at that. Living a life of excitement, adventure, and sailing the seas of the Kraken’s Caribbean is enough for her. But when the Quill is stuck in dry dock, Janey is left to search for distraction along Tortuga’s waterfront. How does a pirate occupy herself? Certainly not by making friends with a six-year-old boy or mooning after the boy’s father. That’s not how a pirate behaves!

Widower Benjamin Silvestri arrived in Tortuga seeking a fresh start. At first, the pirate haven doesn’t seem like a safe sanctuary for second chances, but life is full of surprises. The sun breathes life into his little boy, and new freedoms help his errant niece embrace her true nature. And then there’s Janey. A pirate and most unconventional woman, she stirs feelings in Benjamin that are far from proper.

But who’s to say what is proper in Tortuga? Before he and Janey can explore the possibilities, Benjamin’s son and niece disappear onto the high seas. Together, the couple set out to rescue them—because only a loving father and a cut-throat pirate stand a chance against the dangers of The Pirate Circus.

“I’m sorry. I just….” He shook his head. “You’re a very attractive woman, Miss Janey. Here I am, alone with you in the dark of night. Do you have any idea how improper this would be in England?”

She snorted, amused yet pleased to hear him call her attractive. “Well, you’re not in England, and no one cares here.”

God, maybe Tortuga was rubbing off on him at last. What a relief! “Then don’t. You left England behind, for good reason from what I understand. Don’t haul it back into your life.”

“I wish it were that simple.”

She slid from the chair and sat next to him, patted his arm. He was such a beautiful man, more than she could ever aspire to. But if she could help him, maybe they could be a bit more than friends. She hoped.

“Benjamin, it is that simple. They can’t touch you here. Whatever drove you here, it’s gone.” She wouldn’t mention the spirit Mama Lu had seen. Glancing over her shoulder, she hoped it wasn’t anywhere near. If it was Charlie’s mama, she should be hovering over her son.

He set his hand over hers. “You’re a good woman.”

“I’m a pirate. I sail with the Quill, and it’s a good life. Just because I’m land bound at the moment, doesn’t make me a good woman. I’m a good pirate.” The heat from his hand raced up her arm and lodged at her heart. Under the quilt, her legs drifted apart.

“No, you’re both.” He turned his face toward hers. The firelight danced on the gold in his eyes.

She stared, mesmerized. When he kissed her, it seemed an explosion struck them both, setting off a natural chain of events she had no objections to in the least.

Damn, his lips carried the flavor of the whisky, smooth and heady. When he slid his tongue into her mouth, their tongues met with heat and desire, striving to taste and savor the situation. He cupped her head with his strong fingers, but they didn’t last long there. She groaned and shifted closer, the blanket ending up in a bundle at her knees, and one of his hands dropped to slide up her thigh.

Janey seldom talks about the world she came from. Once she’d stepped through the portal to the Kraken’s Caribbean, her life began. Earning a position on the Cursed Quill, she enjoys life as the ship’s bosun. She isn’t the most fierce of the pirates, but she is loyal.

A woman of short stature, she considers herself rather plain, but it doesn’t stop her from being a favorite of the crew or men ashore. She has deep brown hair and eyes, has a curvy figure and understands the demands of the sea.

Benjamin came to the Kraken’s Caribbean from England. After coming close to losing custody of his son to his in-laws, he is ready for a change. And Tortuga is a challenge to his sensibilities. He arrived feeling a keen sense of obligation to his uncle, the legendary pirate Captain Silvestri. He begins work on the brewery, determined to prove his worth.

His young son thrives in the warmer climate of the Caribbean and when he brings a newcomer to the workshop, Ben is thunderstruck at the sensation Janey raise in him. She is a pirate and he struggles with the truth of her evocation, even as he accepts she may very well be the missing piece in his life.