Home Book Reviews Books My Husband Picks Out For Me – Review

Books My Husband Picks Out For Me – Review

I know, odd thing to suddenly do, but… This is curiously hilarious.

My husband has often handed me books while at the bookstore. Covers catch his attention, and sometimes, he does brilliantly. (I can go into that some other time.) This weekend, he handed me a book entitled “Pirate” by Clive Cussler, and Robin Burcell. 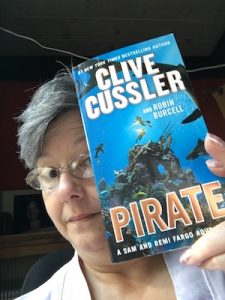 I was game, I bought it. And over the course of the weekend, I read it. And began to notice something interesting. The writer, who I imagine is mostly Robin Burcell, must watch the same television programs that I do. First, this was a contemporary thriller, with the philanthropist treasure-hunting couple, the Fargoes, following clues to a treasure – dodging danger at every turn.

The treasure? King John’s lost fortune, thought to be buried in the English fells (bog) when the caravan carrying the booty took an ill-advised short cut. (Very basic here stuff.)

In the course of following clues, the Fargoes go to … Oak Island in Nova Scotia and the mysterious money pit. From there, to Snake Island, off the coast of Brazil. Next clue takes them to England. Nottingham, to be precise, home of Robin Hood.

Why is all of this curiously hilarious? I like to watch Expedition Unknown with Josh Gates on the Travel Channel. And…he’s explored the legend of King John’s fortune (Englands Vanished Crown Jewels, season 3). And he dove into the legend of Robin Hood (The Real Robin Hood, season 2).

BTW, mention is made in this book of another adventure the Fargoes had, looking for the tomb of Genghis Kahn, (season 2).

Okay, so all of this was looking familiar to me. Then…Oak Island. History Channel, The Curse of Oak Island.

They also did some clue following to Port Royal, Jamaica. (National Geographic – The Sunken Pirate City)

Actual book review? Oh, yeah. I did promise that. It was fun. I think it wrapped up too conveniently, too fast and without enough excitement. It was like they ran out of things to do and places to go. But…well written, easy read. Four out of five stars.

Have you even noticed a curious connection to television when you read? Tell me about it!