Home Characters We Are Emily

Ah, when did I first write of Emily?  Ah, that’s right, back in 2011. A feisty 53 year old widow, invisible to the modern world, and aware of it. But when she fell through a portal and found herself in a topsy-turvy pirate world…she became very visible.

And she found love, passion, bravery and a place to belong where her age simply had no bearing on how she was treated. (But it wasn’t easy.)

At the time, I was 51 and viewed my invisibility with a wry acceptance. Nothing I could do about it. That’s just the way it was. I actually didn’t fight it. Instead, I created Emily.

With every word I typed, I saw myself…if I were braver, took more risks and believed in myself. She acted the way I envisioned the ideal me.

Once The Kraken’s Mirror was published, I began to collect reviews, most spoke of Emily. A few criticizing her attitude. But most loved her spunk, which disguised her fear and doubt. Readers admired her growth, cheering for her until she could see herself as worthy of love. Not to mention sexually desirable and valuable.

Who are Emily’s greatest fans? Women like me. I’ve met several of them, and odds are, they represent a silent many. Jehna, Cindy, Debi…I’m with you!

Because, we are the demographic who is all too often ignored when it comes to having adventures, deserving a sexy partner, or…being seen. Or valued.

The funny thing? I created The Kraken’s Caribbean on a dare. My blog mates at the now defunct Romance Writers Revenge, were convinced that a romance featuring a more mature character would never work or be accepted. I argued that we of the baby boomer generation, older and younger, wanted a story we could relate to.

It was the first book I saw published. It’s still my favorite. And Emily? She flows from my fingers over and over again. I adore her. She is my hero. I am Emily.

As most writers, I was inspired by certain actors. Emily? She was Julie Walters, from, among others, Mamma Mia. I loved her earthiness, her sass and as I read of the woman…her honesty. Alan Silvestri? Had to be Stephen Lang, from Terra Nova. These are my choices…do you have one? Or two? 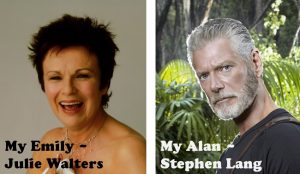