Been giving some deep thought about organizing my life this year. For the most part, I generally have drifted with the tide. Not much for plans, though I do keep a calendar and track appointments.

Goals? Eh…sorta. I certainly have ambitions…but I’m as likely to daydream about what I’d like to happen than take steps toward it.

Which is better than it once was. At least I dream. I know I need to organize myself. So I take classes and push myself to excel at them. Or at least accomplish something.

I’m not sure when this happened. This drifting stuff. I was well into it before I nearly died, in 2007. But dreaming of improvements were there, but even they were fading by then.

Now, it’s 2016 and I am thinking…little steps. I need more than the occasional class. I once met with a writer friend once a week, and at least that gave me some semblance of a routine. She’s moved half a state away, so…okay, a fourth of a state away, but when that state is California, and I’m looking at the north/south of it, that is quite a distance.

A new routine. And, for some strange reason, I thought I’d start with serving myself tea. Or finding somewhere I can go for tea. Not just the drink, but the experience. The husband and I went to tea on our recent cruise and it was surprisingly yummy. Hot tea, in a teacup, with milk and sugar.

Yes, there were some tasty treats, but not a big deal. It was the tea. The husband has praised the idea of tea for quite some time. I’ve been reluctant. I generally don’t care for hot drinks, period. December is my peppermint mocha month, but that is about all.

The lovely pink tea set, with a glorious skull and roses painted on it really wasn’t the total driver for this. Though, I admit, it was a sweet set and I flirted with the idea of making it mine. Then said husband pointed out to me that I have a tea set. A wedding gift, Noritaki, pattern, Reverie. I registered for it over 35 years ago. And it is very pretty. 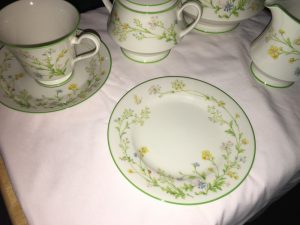 Point made, let’s use what I have.

I don’t know how to make tea. Other than with a teabag, which isn’t what I’m looking for. I’m looking for leaves and a strainer and a timer… (Been reading the Laura Childs Tea Shop Cozy Mysteries – a very fine series, btw. The little I know of tea, I learned from those books.)

I want some ritual. Not a kimono, but a pretty dress. Maybe a hat and gloves. And I’d like scones or treats that won’t shoot my blood sugar to the moon. (Going to do some research for that).

I’m thinking to start this once I’m back from tending my mother, who has recently accepted an oxygen tank into her life. It’s a good thing, but it’s an adjustment and I’ve been helping out.

On the drive to her home, I will pass through a town with a bonafide tea shop. I’m thinking of stopping and taking the first step toward discovering the world of tea…

But first, I’ll need to get my tea set out, dust it off and take a photo. 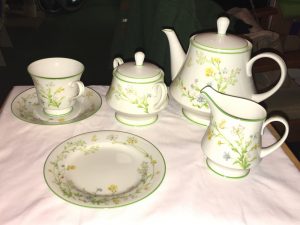 PS – Hmmm, in removing the tea seat from the very top of my kitchen cabinets, I have liberated my husband and myself from three pieces of our crystal. Water goblets, stemmed. Now, in many pieces in the trash. I am unhurt. A lovely green, which matched the china. Oh, well.

I figure I have until March to discover recipes, techniques, etc. Anyone have any secrets to share?