I had a busy weekend. Spent several days with my mother, discussing my sewing projects, current and future. Received a great deal of advice and encouragement. And, most importantly, explanations of how pattern pieces actually fit together to make a finished project.

Yes, I’ve gone on faith with this. I trim pattern pieces, I cut them out, I follow directions to sew this to that – and slowly – the finished product begins to appear. If I read at directions before I’m ready for them…well, I get really confused.

Especially instructions involving items with dimension. Like purses. Nothing will spin my brain into a tizzy more than a purse pattern. I’m reading along…it looks good. Okay, I can see that. Uh…wait…if I connect the straps there…and then set the exterior of the bag into the lining and then sew and turn it inside out…? Where will the straps be? Wouldn’t they end up between the lining and the purse? Or…wait…

I sat on my bedroom floor at Mom’s, trying to make sense of this particular pattern. 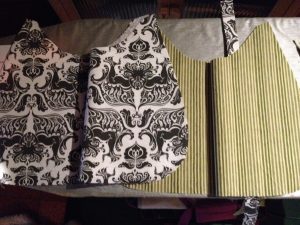 This is something I often find happens when I write. I really don’t plan where I’m going. Oh, I might have a particular scene I’m aiming for…but how I get there is usually a mystery. And if I try to figure it out before I’m ready?

Sometimes, this is a good thing.

I have a sneaking suspicion that if I had a content editor holding my leash, the narrative would be much more simple and direct. Though I’m not certain I’d like that.

I could sometimes use a content editor, no argument. Someone like my mom, who can guide me through the steps until I could notice that I’ve added a third sleeve on before I finished the project.

Of course, if I had someone like that, I’d have no excuses to write the short stories to accompany my series. You know, the stories that explain what happened to the third sleeve. Because, I really don’t forget about them. I will wrap up my writing projects and smile and publish…and add that sleeve to my list of orphaned sleeves. And later, I’ll write that sleeve a story of its own.

That’s how I came to write A Troubling Courtship. I finished A Pirate Circus with all goals accomplished. A couple with a future ahead of them, a villain defeated…with the help of two side characters, a vampire and a werewolf. Who happened to fall in love. 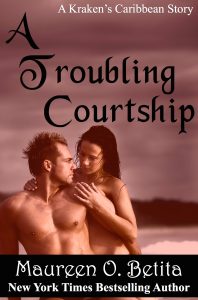 This was a third sleeve. And these two needed a story of their own. What happened after the Immortal made port… That story was published last month, and I hope those who wondered about Davis and Rebecca will find the waiting worthwhile.

I’m presently working on another lonely sleeve. Keitran’s Ascension is how the vampire king became a king and took on the responsibilities of defending Tortuga. And met Alan Silvestri. I need Keitran’s Ascension so I can write The Dark Dreams of Davy Jones…the fifth novel of The Kraken’s Caribbean… This is actually a lonely sleeve, waiting for the novel it will point to. 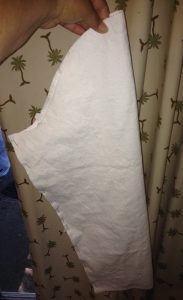 But I do love a good sleeve. And cuffs – but that’s another story. (Or sleeve.)

Anyone else find sewing patterns a challenge in understanding the third dimension? I find the same sort of confusion rises when I attempt to decipher cooking instructions. (Fold an egg?) And the directions for computer graphic programs… (Select what? How?) What about you?