Brought to you by the Kraken Chronicles, all the news Tortuga finds fit to print!

Holidays on Tortuga are not for the faint of heart! The competition to outshine each other at the big pirate ball, deep inside the Tortuga Grotto, is fierce. Pirates vie for the shiniest jewels, the most elaborate fabrics, the biggest feathers, blackest boots…it’s a sight to see!

In honor of the next few weeks, when the pirates are scavenging the seas, digging up their treasures…and the merchants are praying their cargo makes it so they can actually sell to the pirates. (Because once the ship reaches the harbor, pirates won’t raid it, there be honor among the residents!)

Oh, I’m having a contest for the next three weeks…and I’m giving away this beautiful kraken ornament! 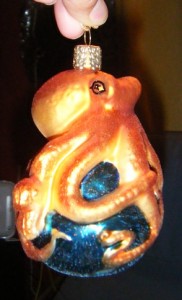 All you have to do to win?

4)     Sign up for my newsletter for another. (See that sign up, over there? On the right, just under the books?)

Wow! Eleven chances! And yes, I’ll trust you to tell me you liked my FB page, follow me on Twitter, etc. I’m a trusting sort!

Now, if you live outside the continental USA…sorry, I’ll be sending you an amazon gift certificate.

Now and then, during the next three weeks, I’ll pick someone to win a book… Yup, it’s the twenty one days to the Pirate Ball!

Now, tell me what color is your kraken?