As promised, I have a comment of the week to announce and an award to … uh…award!

I had so many wonderful entries… The speculations have run wild as to where the Kraken slithered off to, missing the photo shoot for my print cover! But I had to go with the entry that was posted on Facebook by T.t. Miller…it came with a picture… 😉 The Kraken used magic to shift into a tentacled plant to eat this kitty!

T.t. You have won a bronze tentacle bit of kraken bling! 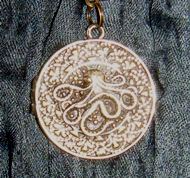 I’m anxious to see what entries I’ll get this week!

Remember…you can enter multiple times! So, let’s keep it going! 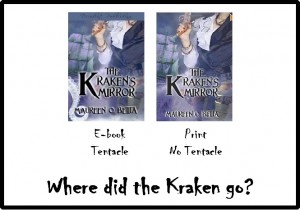 I’m making the most of a sad situation and having a CONTEST! What am I giving away? 1st prize is a Sony Pocket Reader! 2nd prize is A kick-ass kraken parasol and…a 3rd prize is a Betsy Johnson ‘kraken’ ring! When does the contest run? From May 1st to May 31st! So… Where did the Kraken go?

Here are the options: Where did the Kraken go?

2)      He’s outside the Mines of Moria at Gandalf’s request, fighting off the menace in the waters

3)      Sharing rum with the monster in the lake at Hogwarts

How to enter the contest?

1)      Comment on my blog at www.maureenobetita.com and pick an option, or create your own.

2)      Do to FB deciding they don’t like this idea of having contest entries on their pages…don’t enter there. Well, you can make a suggestion and I’ll track it, but it isn’t official. Like my page if you want to…it isn’t a requirement.

3)      Find me on any blog I guest at during the month of May and tell me your option. (Be sure to leave an e-mail address in the comment section.)

I’ll award the three biggies on the 31st…during the month I’ll give away smaller prizes…free books, pirate perch hats and kraken jewelry. Amuse me with clever ideas and you might win something!