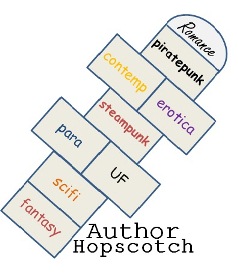 I’m leaving for the RWA Nationals tomorrow, Monday. And later in the week I have three pitches scheduled. Two with editors, one for print, one for e-book. And one for an agent.

Now, I am an extremely prolific writer. I don’t feel bound up by genre limits and I do tend to skip from one story type to another. This can make pitching a challenge. Trying to figure out what to pitch to who, while also dropping enough clues that yes, I also write fill-in-the-blank.

So, here are the three books I’m planning on pushing at the conference. Which would you like to read?

The Changed world is a paranormal romance, set in an apocalyptic future where time lost its way. It is a single title book of approx. 80k.

A cosmic disruption tore the bonds of time apart, leaving Ivy to be born into a changed world of hardship, where survival of the fittest rules. After the mad warlord kills her family, Ivy is captured and brutally assaulted. Now she lives to kill the rapist who kept her child, leaving her nothing.

Helen is a dutiful daughter, curious about the woman who bore her, but loyal to her father and his sovereignty. Raised by the warlord to be a fighter, she discovers the reality of life outside the walls of his fortress isn’t as cut and dried as she thought. Confused and vulnerable, she is hungry for answers.

Ivy is desperate to love this daughter. But dreams of killing the man Helen considers a good father. Is it possible to satisfy her thirst for vengeance without completely alienating her daughter?

A Caribbean Spell is a romantic paranormal adventure of approx. 85k. It is first in a series but can stand alone.

Miranda is a time traveling witch with poor control of when and where she lands. The Caribbean of the 1690’s proves a worthwhile challenge as she quickly finds herself menaced by Captain Isabella de Leon, an evil sorceress with designs on the world.

Out of the frying pan and into the fire, Miranda manages to escape only to be plucked from the Caribbean by Captain Jack Reynard. A man with motives of his own. A masterful pirate, Reynard combines forces with Miranda, who he finds fascinating.

In a quest to foil de Leon’s plan to seize the Orb of Transference, Jack and Miranda speed across the Atlantic to England and back again to the Caribbean, intent on destroying this powerful artifact.

Can these two manage to overcome the forces arrayed against them? In the rush to save the world, death is always a possibility, and love inconvenient.

Almost Human is a romantic science fiction of approx. 75k.

At 83 years of age, Rachel Inez Astor threw herself from the bow of a cruise ship in 2039, only to wake up aboard an alien ship, restored to youth and cut off from the rest of the world. She adapts to her changed circumstances, growing to love the underwater realm.

In 2065, Naval Investigator Sam Montgomery inadvertently rescues her. He isn’t sure what to make of this woman, or the aliens who care deeply for her. Are they a threat? Is she?

The world is full of paranoia, restricted freedoms and environmental catastrophe. With advanced science and technology, the aliens hold the power to restore balance. If they can survive exposure to a frightened planet. The key rests with the reborn Ria, who is learning how to be human once more, and Sam, a man torn between a lifetime of lies and taking a chance on the unknown.