Home Uncategorized I Don’t Do No Resolutions

I Don’t Do No Resolutions

Hmmm… I don’t do resolutions. But then again, I have always shied away from the idea of specific goals. I’m superstitious.

Let me explain. Specific goals tempt the gods to raise an eyebrow and laugh. I have no idea where I came up with this conviction. But it seems to run in my family. If you keep it nebulous and unstated, you hide it from the forces in the world who will do their best to see you fail. Or laugh when you fail. It’s a bit like Gollum, hiding in the Misty Mountains with the awesome ring that makes him invisible.

Now, this goes totally against the other side of my convictions…that the world wants you to succeed.

I’m a contrarian. I really need to design a t-shirt.

I’m working on teaching the two sides of my philosophy to waltz. I think they are actually going to end up as a great couple.

In the meantime, I do have a…let’s see, what can I call it? 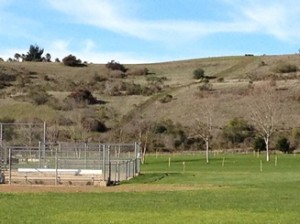 This is a hill. With a trail to the top, which winds around the summit before descending back to the park where it begins. The park locally known as Blue Ball Park, though it does have an official name that isn’t so giggle worthy. But when you put public art consisting of giant steel balls scattered at a park and paint them blue, what else can you expect?

Now, the hill. It’s a steep hill. Probably about the equivalent of the hike to Nob Hill from Union Square in San Francisco. Blue Ball Park has a walking path around the playing fields and twice around this nice, fairly level path, is 1 mile. Bonnie, the dog, enjoys this walk as there are numerous gophers and ground squirrels to stare at.

She likes to stare at rodents. What can I say? She’s very good at it!

This hike up the hill… I’ve looked at it. And turned away. The day the space shuttle made its farewell tour of California, the best view was at the top of the hill and people were lined up watching her fly by. I stood on the lowlands.

So, this is the idea. I want to climb that hill in 2013. In fact. I want to make climbing it a regular thing. I’m not in the best shape and I know it will be a slow hike, with many rest periods along the way. Which is okay, I’m not looking to set any records. Considering the name for this little hike is Killer Hill Trail…I’m not going to push it. 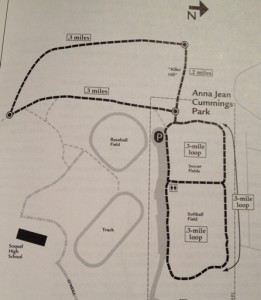 It’s a simple thing. Climb a hill. I’m going to be a bit ambitious and say…I want to climb it once in January, twice in February, three times in March and so forth. (Though twelve times in December? We’ll see. If it’s a wet December, like this one has been, that could be difficult to do.)

Is this a metaphor for what I want to do with my life?

Maybe not. I’m not sure. My Gollum isn’t talking to Galadriel at the moment. (I love that spell check actually knew that name! Isn’t that cool!?)

What about you? You have a hill in mind to climb? Metaphorically or actually?