I don’t know for sure where he’s been, but wow, he has been popular. I saw him coming in, past midnight while standing out on the pier off Tortuga. Captain Silvestri kept assuring me that the big guy would be home when he was good and ready. Next time, I’ll listen to the Captain!

So, we were standing there and suddenly the water began to boil off the edge of the pier. And a glow filled the water. I thought maybe a battalion of Navy Seals had come to teach Tortuga how to party, but that wasn’t it.

One by one these tentacles rose into the air, festooned with travel stickers and trinkets of every sort! Beads from New Orleans, fell at my feet. Then a snow globe from San Francisco. A lighter in the shape of the Statue of Liberty. A key ring with a space shuttle model. An odd rock with spikes…I had no idea what that was.

But it sure is pretty!

A glittery belt buckle with a big “E” all in diamonds fell at my feet. (Silvestri snagged that one. Pirate!) And a huge bag of coffee stirrers!?

I smiled. So relieved and then I held up my hat, all the names of the 119 entries of the people who’d tried to help me figure out where he went.

Yes, those tentacles are that talented… He reached down and drew a name… 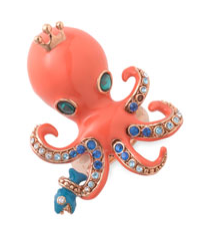 The winner of the Betsy Johnson Octopus Ring is…Nikki Palun!

And another name snagged by that slippery appendage… 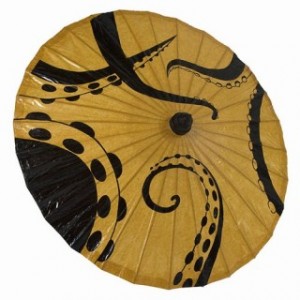 The winner of the kraken parasol is…Lindsey Hutchison!

And last, but far from least, one more name!

The winner of the Sony Pocket Reader is…Fran Colley!

I laughed and the Great Albino Kraken made the oddest sound… I think he was laughing. But it may have been gas…

Winners! I’ll be contacting you via e-mail and asking for instructions on how to get these grand prizes to you!

Keep an eye on my blog where every Sunday I’ll be sharing more of these incredible sightings in the coming month…and chatting about the next book in the Kraken’s Caribbean trilogy, The Chameleon Goggles. Where the further adventures of the kraken continue as the steampunk world of Novan threaten his Caribbean! The passionate relationship between Captain Jezebel and Mick is tested as her past threatens their future. Pirates, zeppelins and the wonders of the chameleon goggles!