OMG. I lost an entire day recently…trying to finish my bolero jacket, lovingly called the pirate bolero because the fabric is black with pirate sayings in silver on it.

I love the fabric. I bought extra (good thing as I cut one of the jacket sections upside down and had to cut another one) so I could make bags to give swag away in. (And because I knew I’d make mistakes.)

So, I cut the jacket out in my sewing class, with lots of help from the wonderful ladies at the Cabrillo College Sewing Class. 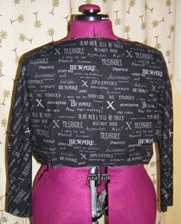 Cutting out took a long time because this baby had a band that was done in…wait for it…twelve pieces! Yup! Four for the band, four interfaces for the band, four for the  other side of the band (I don’t know the official name for this)! Putting them together left me with something resembling a Mobius strip. 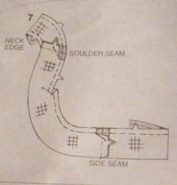 Then I had to somehow, magically, iron the facing, sewing them together – making eight of the pieces into one…then taking said loop of fabric and fitting it to the jacket.

Took it with me to my Mom’s house. (Mom has sewn her entire life. I think she was born threading a needle.) Mom helped. But…even Mom was flabbergasted at the instructions, now lovingly called, the directions to the ninth level of hell.

How bout this way? No.

Finally, we figured out how the band was supposed to be pinned, then sewn.

Now I got to sew.

(About this time I’m wondering why I ever wanted to do this.)

Begin to pin it to band on jacket. Mom shakes head. One piece was put on backward. But that took a while to figure out.

Band at sleeve changed because they would be too short if folded in half like the directions to the ninth level of hell suggested.

What did I learn?

Hand basting is my friend.

Seam rippers are my best friend.

Nothing can beat having Mom right there.

(She’s gonna keep my plaid pirate coat and fix the zipper mistake… Remember my outrage when I bought this pirate coat and it had a ZIPPER in it!? It’s coming out. Thanks, Mom!) I already suffered one nervous breakdown with the Mobius Strip. I don’t need another with how to recreate something nice from the former home of VERY OFFENSIVE ZIPPER! 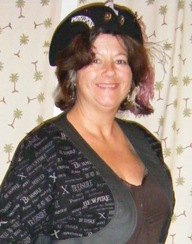