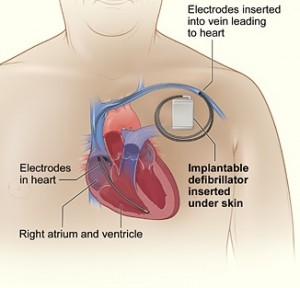 So, it’s been a little over 5 years since the modern miracle of medicine stepped forward and installed a portable defibrillator in my chest. Aside from the circumstances that saw this necessity, it’s been a good five years. At this stage, I’m just biding my time, waiting for that little alarm to go off inside.

What alarm? The little alarm which lets me know that it’s time to replace the unit because the battery is winding down. I’ve only had the handy little sucker fire off twice, both false alarms. All about how the device was set to make a mountain out of a molehill, so it did.

Not a great feeling, that interior kick from a horse. But it’s survivable and even doesn’t knock a person out. And that is a good thing to know, since I could have been driving a car, etc. Now I know that if that happens, I won’t lose control of the car or lose consciousness.

Sometime, in the next year more than likely, I’ll hear those little electronic chimes and it will be time to call my cardiologist and schedule that replacement. It will be the entire device, because it isn’t possible to just replace the battery. With luck, the leads, which thread through my arteries into my heart, won’t need to be replaced. So, it should be an out-patient thing.

I remember when I first took on this little personal EMT. How the shoulder incision was so sore, and swollen. The things I needed to be careful of, like not lifting my arms, taking care of the position I sleep in…that was the first physical challenges.

But the biggest ones were the mental challenges. Getting used to having this little watchman inside me. The metal box and the scar. And the feeling of it inside me. For a long time, several years in fact, I felt like I’d never get used to it. Every seatbelt hit it, my bra strap crossed it, purse straps would irritate it. Still does, but the awareness of it has faded to a blip on my radar. Used to be a whale on my radar.

As the time approaches when I know it will be replaced, I’m growing aware of it again. Every now and then, I hear the use of electronic tones on the radio and I have to pause and think, “Was that my ICD?” I figure when I do hear it for real, I’ll freak out a bit.

My cardiologist says once it goes off, I will typically have 3 months to get it replaced. No massive rush, but still…I wonder… Will it take me another matter of years to get used to it all again? I hope not.

Recently I read that one of the ICD/Pacemaker companies was exploring a new device that wouldn’t need a battery replacement, because it will be powered from the electrical energy the heart itself generates. That would be nice! No new surgery every 5-7 years.

Living with a device in your body, connected to your heart, is a big deal. And a little deal. In the larger scheme of things, it means if my heart does something funky, I have more than a chance. It gives me the confidence to travel, to be places alone, to drive and see very little change in my life from before the sudden cardiac death.

But it’s tricky. It feels odd. I think it will always feel odd. It’s a constant reminder that I am fragile. That life is balanced on the edge of nothingness. All of the time.

Another FB friend recently returned from a near death incident to find herself with a pacemaker. I want her to know…it’s all true. It will feel wrong. It will feel right. It will be a godsend and it will scare you. And it’s okay. Ask me, anytime. Anyone who wonders…ask me. Robin Leigh Anderson, I’m here for you!