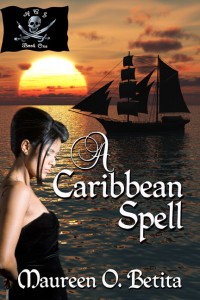 Announcing the beginnings of a new pirate series! After nearly a decade of work, I have taken the plunge, delightfully jumping from the gangplank into the sweet blue seas of self-publishing with the debut of my series, A Caribbean Spell!

Meet Miranda, experienced time traveler, sexual adventurer, and do-gooder. Making friends and finding lovers comes easy, while interfering is her specialty. Confident, impetuous, she treasures new experiences; life is for learning and the joy is in the journey.

Riding the currents of time is a challenge this witch is up for. No matter where or when she lands, she hits the ground ready, looking for whatever challenge the universe presents. She discovered her talent, to walk between the realities of time and space, after losing her 20th century world to a devastating earthquake. Seeking a cause to die for, or a reason to live, she stumbles upon the Caribbean of Jake Reynard. This new realm proves more tempting than she counted on.

Not to mention totally unfamiliar. Port Royal thrives, and is certainly not the wicked city her world’s history painted it. But it does prove exciting. Handsome pirates, magical devices, even an evil sorceress sail these seas.

Before she faces these realities, she befriends Joanna, married to a good man whose gentle nature wins Miranda’s allegiance. Port Royal finds her unconventional but is still willing to embrace her differences, despite her uncouth clothing, her lack of social skills and an uncanny ability at speaking the truth, regardless of propriety. A beautiful setting, charming climate, this sweet world quickly captures her loyalty. And her heart.

Once danger rises to threaten her new friends, she takes it on. Better the perils aimed at the city come her way since she can handle them using assorted tricks, magical spells and the skills she’s developed in decades of travel.

Miranda is a wounded woman. Though appearing merry and in control, the guilt of survival drives her to take desperate chances. Going up against an evil sorceress is right up her alley. What begins as nothing more than a simple liaison with Reynard to keep her magical energy primed raises questions she isn’t prepared for. Has she really found a reason to live in this freewheeling world?

She may be a witch who restores her magical energy through sex, a role the pirate Reynard is delighted to fulfill, but she didn’t count on the sex to deepen into real caring, or love, heaven help her.

Reynard loves his life. A consummate pirate, he treasures his rum, his ship and showing how clever he is. When acquaintances rope him into assisting in a rescue of what sounds like a reckless woman, taken prisoner by a notoriously evil female pirate, he agrees. Raising sail to save the world is the last thing he expects to be caught up in. But if that is what it takes to keep the fascinating witch he pulls from the sea, then so be it. Falling in love is not part of the plan. He didn’t build his profitable reputation on doing good deeds and trust doesn’t come easy.

But trust and luck is something these two need if they are to survive and master A Caribbean Spell.

How many books will there be? 30! Yes, you read that correctly. The second book, Red Sean’s Revenge, will be released in June, 2013…the next in September and a fourth in December.

Where can you purchase A Caribbean Spell? I’ll be updating the books soonest, but in the meantime…

I will be putting the book out in print, stay tuned for details!