Over on the Revenge, there be swag…all weekend I be celebrating the release of The Chameleon Goggles… Comment and ya never know! 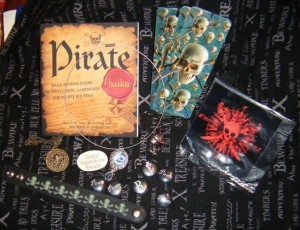 What’s here? We gots seven pins, two neckalces, a sticker, a glow in the dark bracelet, a book a pirate Haikus and three holographic skull and cross bones bookmarks…and a sparkly key ring!

I be dressed fer the party, but no worries, no dress code ta join this bunch!

Emily recognized the woman’s style of dress from the strangers she’d seen the morning after the Cock celebrated Alan’s buy in. She and Janey hurried to keep up as Davis began to follow the woman, reached her, and put a hand on her arm. The stranger spun toward him, grimaced, and slapped his face. He went down!

A mere slap sent a werewolf to the cobblestones?

The woman kicked at Davis. Emily and Janey got close but she spotted them and ran off Emily followed. “Help Davis, Janey! I got her!”

But she couldn’t catch her prey As Emily tried to keep pace, the distance between them grew. The woman sped up the street, passing the ballroom as the doors opened and a familiar form filled the doorway.

She may have taken down a werewolf, but she was no match for a vampire. He appeared to blur and a second later, he grasped her arm. She tried the slap again and Keitran laughed at her and spat something at her feet.

Emily caught up with them, panting. “Thanks! We think she…might have something…to do with Jezzie’s disappearance.”

Keitran inhaled deeply at the struggling woman’s hairline. “She stinks.”

“Davis thought so, too. What did you do to him?” Emily stood up straight and stared at the woman.

“I don’t know what you’re talking about! Unhand me!” Her face might have been pretty, if not for the deep lines of habitual frowning around her lips. Then she spat at Emily, and even that bit of prettiness disappeared.

Emily wiped the spit off her cheek and gritted her teeth.

“She did something to Davis?”

Keitran snatched at the woman’s free hand, heading for Emily. “Clever, but there must be a limit to how many you carry.” He struck her. As she fell, gasping, he plucked a metallic thorn from the woman’s palm. He sniffed it. “Some drug.”

Keitran licked the thorn. “No, a fast acting sedative of some sort, I think.” He casually reached out and scratched the woman’s cheek with the item as she renewed her struggle to get away. “Be still.”

Whether his voice calmed her or the drug, the woman slowly stopped fighting his grip. She stood, back bent, breathing deeply.

The thorn dropped to the cobbles and Emily shivered. “Thanks.”

“Davis said her scent surrounded Jez at the last place he could track her. Will you help me get her back to the Quill? Maybe we can learn something.” Dangerous asking a vampire for help, but she didn’t have many options.

He smiled, raising one eyebrow at her. “Certainly.” He easily lifted the woman to his shoulder and  gestured at Emily to proceed.

She shivered and did so.