Ladies and Gentlemen! Boys and Girls! Pirates and Scalagwags! Welcome to the Greatest Show In Tortuga!

Look to the yardarm! There our daredevil Felix balances upon the lines, juggling three cannon balls! Without a net! And now Johnson tosses him a fourth! And a fifth! And…dear. Well, we have many jugglers!

*Clean that up lads, and bring out Leona and the Dancing Bear!

*What do you mean, you can’t find Leona? Oh, you found part of her? Oh. A shame, but at least the food bill for Boris will be smaller this month…

Ladies and Gentleman! We have jugglers – not as many as we used to have – but we have jugglers! We have a trained bear – not as trained as we thought… We have six chatty parrots.

We have pirates on unicycles, monkeys that will charm you – What? Arrested for picking pockets…

Ringmaster stalks off the stage…

Yeah, times are hard for the pirate circus, but don’t blame them…it’s the new Admiral. There is something hinky about Germante, not to mention that black panther who seems inordinately fond of cats. (Not in a good way.)

But Tortuga will weather through! And with the release of The Pirate Circus, I can tell the story of Janey and her pursuit of the newest Silvestri in town, Benjamin. Late of England, this engaging but reserved man arrives with skills that his uncle, Captain Alan Silvestri, treasures. But have no fear, the cursed pirate wouldn’t abuse his nephew.

But there are other questions beggin’ ta be answered!

Will Janey succeed in convincing Ben that pirating isn’t an evil profession?

Will Ben’s little boy, Charlie, make friends with the young kraken in the bay and escape the ghost haunting him?

Will Lee, Ben’s niece, find someone of her own…or will Germante make all her dreams come true and correct God’s mistake?

You’ll have to read to find out! 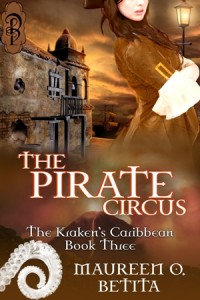 Bosun Janey knows who and what she is. A pirate. And a damned good one at that. Living a life of excitement, adventure, and sailing the seas of the Kraken’s Caribbean is enough for her. But when the Quill is stuck in dry dock, Janey is left to search for distraction along Tortuga’s waterfront. How does a pirate occupy herself? Certainly not by making friends with a six-year-old boy or mooning after the boy’s father. That’s not how a pirate behaves!

Widower Benjamin Silvestri arrived in Tortuga seeking a fresh start. At first, the pirate haven doesn’t seem like a safe sanctuary for second chances, but life is full of surprises. The sun breathes life into his little boy, and new freedoms help his errant niece embrace her true nature. And then there’s Janey. A pirate and most unconventional woman, she stirs feelings in Benjamin that are far from proper.

But who’s to say what is proper in Tortuga? Before he and Janey can explore the possibilities, Benjamin’s son and niece disappear onto the high seas. Together, the couple set out to rescue them—because only a loving father and a cut-throat pirate stand a chance against the dangers of The Pirate Circus. 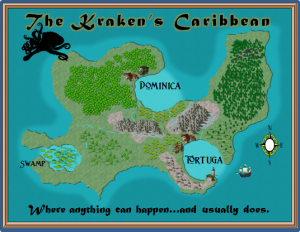 The  newest addition to the world of the Kraken’s Caribbean is dedicated to the Bosun of the Romance Writers Revenge, Terri Osburn. Who I hope will recognize herself and forgive me any freedoms with her person. And I hope she finds a Benjamin of her own! 😉

The Pirate Circus is available today from Decadent Publishing and other fine e-retail establishments!

What daring circus act would you bring to the famed Pirate Circus? I’ll give away a copy of the book to one lucky comment! (Be sure to leave me yer e-mail addy!)