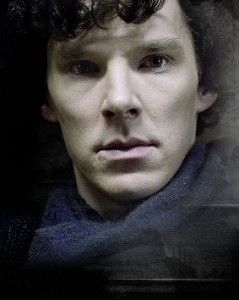 Have you seen it? The first season of Sherlock, the BBC update of the adventures from Baker Street is amazing. And the premier of the second season just showed on my local PBS station. Weeee!

I wasn’t sure at first. I’m an old Sherlock Holmes reader from wa-a-a-a-ay back. One of the first mystery series I ever read and one I still enjoy. I’ve seen numerous adaptations, films, television series, even comic books, fan fiction and thoroughly enjoyed most all of them.

Nichol Williamson did an interesting portrayal of the detective as a drug addict. Loved it. One of my favorites, by the way. The Seven-Per-Cent Solution. If you like Holmes movies, look for this one!

But Benedict Cumberbatch is absolutely mesmerizing to watch. Whether or not you agree with the portrayal, this actor is intense and compelling. I personally love the ambiguity of the character. Is he gay? Is he bi? Is he…does it matter? Not really, not to me. The intellectual wheels are literally visible in Benedict’s eyes and the body language, the story being told without words…wonderful!

Now, I write pirate stories. But more than that, I write the type of characters I could imagine Benedict playing. In fact, it’s very inspirational to watch this young man.

Not that long ago, I saw Tinker, Tailor, Soldier, Spy at the movie theaters. And felt that Gary Oldman did a masterful job portraying George Smiley. But I can remember sitting in the movie theater, titling my head at the agent called Peter Guillam… “I know this guy…who is he?” Finally, something clicked and I realized. “This is Sherlock!”

I’d love to see this guy in a pirate movie…I’m thinking…I have a character in the third book that I leave a bit up in the air at the end. Fans of Lee? I am working on Lee’s story and honestly, wouldn’t Benedict make a wonderful Lee? Yeah, a bit slight in stature, but I think he could do it! 😉