The REAL Origins of Star Trek (and probably Aliens)

What I believe…this is not based on any research or newly discovered letters between Gene Roddenberry and the estate of A.E. van Vogt.  (Born in 1912, died in 2000)

I just know what I read and when I read it. 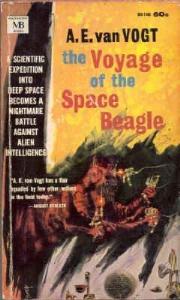 In 1950 A.E. van Vogt wrote a novella called The Voyage of the Space Beagle. It consisted of three separate episodic type stories of a ship from earth exploring space. (Sound familiar?) And the adventures they faced. In one, they faced an alien who invaded the ship and used the humans as incubators (sound familiar?). In another story, a struggle developed between the head of the science department and the military commander of the ship. Hmmmm! A science officer who followed a very logical system of analyzing behavior (another thing that sounds familiar?)

All right, we all know that Star Trek is really Wagon Train in space.

Now, van Vogt is considered one of the founders of the golden age of science fiction, and he wrote several books which I read and enjoyed, including Slan and the Null-A series. No, he wasn’t a perfect
writer, especially considering the things wanted for today’s modern market. Most of the ‘goldens’ did a great deal of telling instead of showing.

Eh, that was just the way they did things. A great many of them wrote short, episodic fiction that combined to create a longer story. Most first published in small sized magazines, full of short stories. And I’m not certain, because I’m haven’t studied the era, that none of them are women. Hey, it was the 1950s…am I surprised?

But honestly, The Voyage of the Space Beagle really reads like the precursor to Star Trek. Even the characters! Don’t believe me? Check it out, the book is still in print…

I still own several of the books my Dad got from his early membership in the Science Fiction Book Club. Including a large hardback that contains three of A. E. van Vogt’s books. (Okay, my sister has them. Got her bid in before I did, damn it. And I even got that sucker signed by A.E.!) I have managed to find several of them in pulp paperbacks over the years…

Anyone else out there a fan of the golden age of science fiction writers?