Okay, onto the trip.

DC. We started the day with a walk down toward the White House, where the Kraken took over the podium and the Oval Office. First order of business was to make it a felony to eat calamari. And because the Kraken is partial toward all ocean predators…anyone caught eating shark fin soup will be keelhauled. 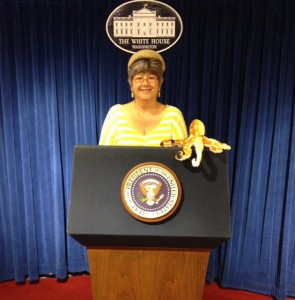 Happy with his conquest, we boarded the DC Metro and wandered to the Eastern Market, where a large flea market & farmers market impressed us with the variety of wares. And where we were automatically singled out as from out of town, because we were wearing colorful clothing.

Half a mile toward the Potomac, we found the National Museum of the US Navy. Ah, a walk down memory lane as the Kraken remembered the many ships he tangled with, the sailors he escorted into the deep…the canon and ship wheels he enjoyed as make-shift merry-go-rounds… He became quite nostalgic! 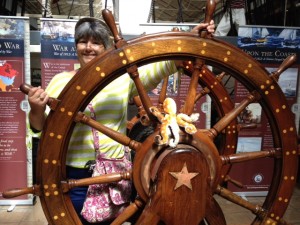 We left the Navy Yard and hiked another half mile to another Metro Station for a juggle of on/off/on/off until we reached Union Station. The human’s turn to eat, shop, arrange for bikes to ride tomorrow and the evening Monuments by Moonlight tour. Then back on Metro where we left one station beyond ours because…for some insane reason, we thought we needed more walking. But this way we did get by Chocolate Moose where we picked up a few pieces of candy/chocolate and headed for our hotel. And just managed to avoid some twitty political discussion getting out of hound. Some loudmouth with a bullhorn upped the ante and the cops arrived.

Now, back in our hotel…and my Asus computer, not even a year old, freaked out in an epic battle between my touchscreen and my touchpad…and no one winning. A temp fix until we get home where I can scream at Best Buy… Now, to use the husband’s computer to post this!

Anyone else been to DC and have an recommendations for us to visit? Have you read the book, haven any comments to make?