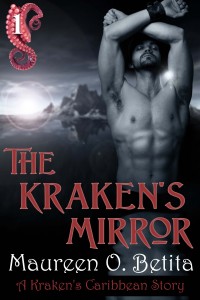 Treated by our youth-oriented society as invisible and sexless Emily Pawes attends a pirate festival to recapture the make believe magic she knew as a young woman. She wins an interesting bit of booty at a bric-a-brac stand. The Kraken’s mirror is a magical portal and transports her to a land of Hollywood piratitude, where swashbuckling heroes own iPods. With little choice, she embraces the madness, deciding she’ll play pirate until she figures out how to get home. Or wakes up in a padded cell.

Instead of men in little white coats, she encounters the handsome Captain Alan Silvestri. He is a man haunted by a strange curse. Good luck is his to command, but it comes at the cost of any place to call home or people to consider family. Resigned to die shunned by all, forced to sail every three days, he begins to dream of a special woman.

When they meet, sparks fly, passion flares. He needs her to be free, but more than that, he needs her to be whole. They set sail, uncertain of who has control of the wheel, seeking to defeat his curse of good luck and discover all the Kraken’s mirror plans for them. Will Emily stay in this pirate haven to fight alongside him or will he lose her because of his curse?

The enigmatic woman turned away from him, chuckling.

“Oh, relishing the clichés. I’m…Pawes. Call me Pawes.” She held out a hand, moving it side to side as if searching for him.

“Ah, women do like to take their time.” He pressed a quick kiss on her knuckles and slowly released her.

He detected a slight hesitation before she nodded. “Yes. While men generally are in a hurry.” She turned her face toward him. “And you?”

“No, Pawes or Mrs. Pawes if you like, please.” Drawing a deep breath, she tried to focus on him, then winced, closing her eyes tightly. “You were behind me. Why didn’t it hit you?”

“Because I was behind you, but I twisted my face away in time. Let me escort you somewhere quiet and buy you a drink.”

“Are your intentions honorable?” Her head tilted.

“Of course not, but not actually dishonorable. I promise to warn you if driven to some despicable bit of deviltry.” He must have impressed her, because a smile danced across her face, that upward tilt of her lips to the left exactly as he remembered from his dreams. He wondered if the rest of the details were the same.

Paperback Dolls – Mona Leigh
In her inaugural book, Ms Betita has combined time travel with lots of action, magic, and a healthy dose of erotica to craft a steamy, entertaining tale.

The Romance Reviews – Teresa T –
I couldn’t put it down! It was surprisingly romantic, very sensual and the love scenes were delicious.

If you like pirates, and even better, pirates with access to plumbing and plunder, with a dose of fairytale magic, you will enjoy this alternate world romance.

What a delightful, remarkable, and unexpectedly peculiar world Ms. Betita has created in her rendering of the 17th century Caribbean.

The Kraken’s Mirror was a delightful story with characters that are really charming. Maureen’s voice is well suited for this kind of tale and she paced the book well. It’s a lovely story of a man who finds love after years of not being able to have it and a woman who finds a love and passion she never thought was possible at her age.
——-
Heroine – Emily Pawes

Widowed less than a year, Emily is feeling a bit rudderless when she is swept to the Kraken’s Caribbean. She’s pragmatic though, and extremely open minded. If she’s nuts, well, she’s gonna enjoy the madness. She’s got a handsome pirate interested in her, good friends and a new exciting life. Seize the day!

Emily has mad knife skills and is learning how to use the pistol. She’s not the best at fighting, but once the challenge rises, she goes at with the same approach as everything – full speed.

She is a bartender by trade and uses her skill as a bookbinder to earn cash while sailing.

Vital Statistics – 53 years old, short brown hair, shot thru with silver, deep brown eyes, is on the short side, a bit stout. Most distinguishing characteristic – She is unapologetically vulgar. Loyal to a fault and hates to lie.

Captain Silvestri bears the weight of a bad choice made when he was 15, and now that curse is closing in on him. Good luck is his, but the cost is steep. His good luck comes from taking the good luck from everyone around him. None dare stand against him, as the curse will strike them down with mercy.

Begun as a lark, the curse’s touch is growing more and more harsh. He needs a way out. Fifty years a pirate, he is rich and ready to settle down. If he can.

Vital Statistics – Born a gentleman and still a gentleman, even at 65 years of age. He’s a tall man, vital and well built. He sports long silver hair and has striking azure eyes. He carries secrets and has few true friends.