Let me begin with a very clear statement. I don’t know how to cook. Barely know how to bake. But give me a clear recipe and I’m fairly good at following it.

I feel the same way about sewing instructions. And knitting. And crochet. But I digress!

Back to baking… It’s three days from Christmas and I made a cake last night. (Cookies are planned for Christmas Eve, when the husband can provide back-up.)

I’ve made this cake before, but it’s been a few years. And, somehow, I forgot what a PITA it is. I picked up the recipe card at Starbucks. I think they actually had some of this on the shelf for a little while. And it was good! 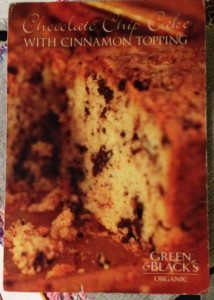 Then I made it. Since I had eaten it as a slice from a loaf, I used a loaf pan. And it baked itself right out of the pan…Kept rising… It didn’t spill out. But it was…wow. Tasty, but…heavy. Like a rock heavy.

This time I knew to use a different pan, like the one they mentioned in the actual recipe. As my husband struggled to stir the four in, I remembered more.

How this stuff was so thick it didn’t pour into the pan, it had to be – what would be the word? It had to be ‘plopped’ and then spread out with my hands.

I spread the cinnamon/sugar/butter crust on top and put it in the oven. Pissed at myself for what I’d forgotten.

But the scent in the house as it baked! 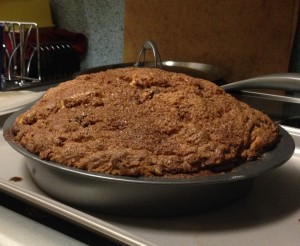 At the end it looked like a lemon meringue pie, high and proud.

But it wasn’t a pie.

We let it cool, then carefully cut out a slice.

All I can say…it was heaven. It is heaven. Absolutely radiating cinnamon and chocolate… First piece was a delight on the tongue, chocolate still melty, cake warm, cinnamon crust easy to cut into. 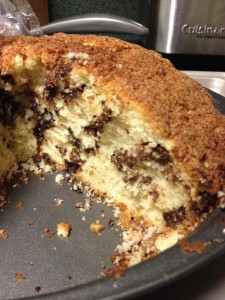 So worth the hassle!

Afterward, my husband went onto the Black&Green’s Chocolate website, searching for what we’re doing wrong. (Sure, it taste great, but it’s still heavy as a rock.) Nothing there.

Oh, well, I’ve dealt with troublesome recipes and treats before. Almost crippled myself with a spritz cookie gun one year. And we still have a huge amount of cinnamon left from an online order, because I wanted real Makara Cinnamon for my holiday cinnamon wreaths.

So! Anyone else have any adventures in baking a so-good-but-such-a-hassle treat?