Home Uncategorized What Came First? Or Fourth? Or Sixteenth?

What Came First? Or Fourth? Or Sixteenth?

I’ve spent a lot of time thinking about this question. Why? Well, it has to do with advice I’ve received from professionals regarding the covers of my Forever A Pirate series.
To leave the numbers on the front of the books or not…that is the question.

Or to make certain the reader knows the best order in which to read the books, and perhaps sell less…

Because readers will see the number and pass them by because…why?

This is something I am wrestling with. Is it better for a reader to know, from the very beginning – that wonderful looking cover is the sixth in a series so they might want to read books one-five before they tackle six…and let them make the choice to go there or pass it by…
Some readers would see that six and celebrate… Whoohoo! A nice fat series!

Some readers would see that six and sigh… Not enough time…

But…if I take the numbers off and someone picks up book six and reads it…and is sorta pissed because they normally don’t read series and they feel tricked… Isn’t that a nasty thing to do to a reader?

I want the readers who adore series. Who love to read from one to the end and don’t appreciate having to search out the publication date to put a series in the correct order. (I’ve done this. It pisses me off.)

I have two series. The Kraken’s Caribbean is presently three books long, four books by the end of the summer if all goes according to plan. These books can be read out of order. But they are better in order.

Forever A Pirate is thirty books. In reality, it is one book. One massive, three million plus words story. Broken into thirty volumes. In my heart, I feel to promote them as separate entities would be trickery.

Now, I like a good trick. But not when I’m dealing with my readers.

At center of this thing stands what I consider my integrity, the core of a fantasy reader who believes in the big books and the readers who want them, love them…and want to read them from one to thirty. Not skip around.

Would Tarzan read differently if read out of order? Would Pelucidar? John Carter of Mars? (Yes, I raise my eyes to Edgar Rice Burroughs and wonder…have times changed and I’m killing my chance at finding readers by leaving the numbers on the covers?) 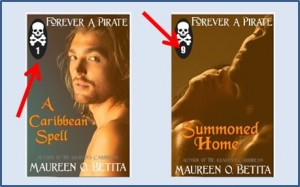 The numbers stay. I’d rather have readers who know before they read and will buy all thirty books, then readers who want to throttle me after reading one and proceed to trash me far and wide.